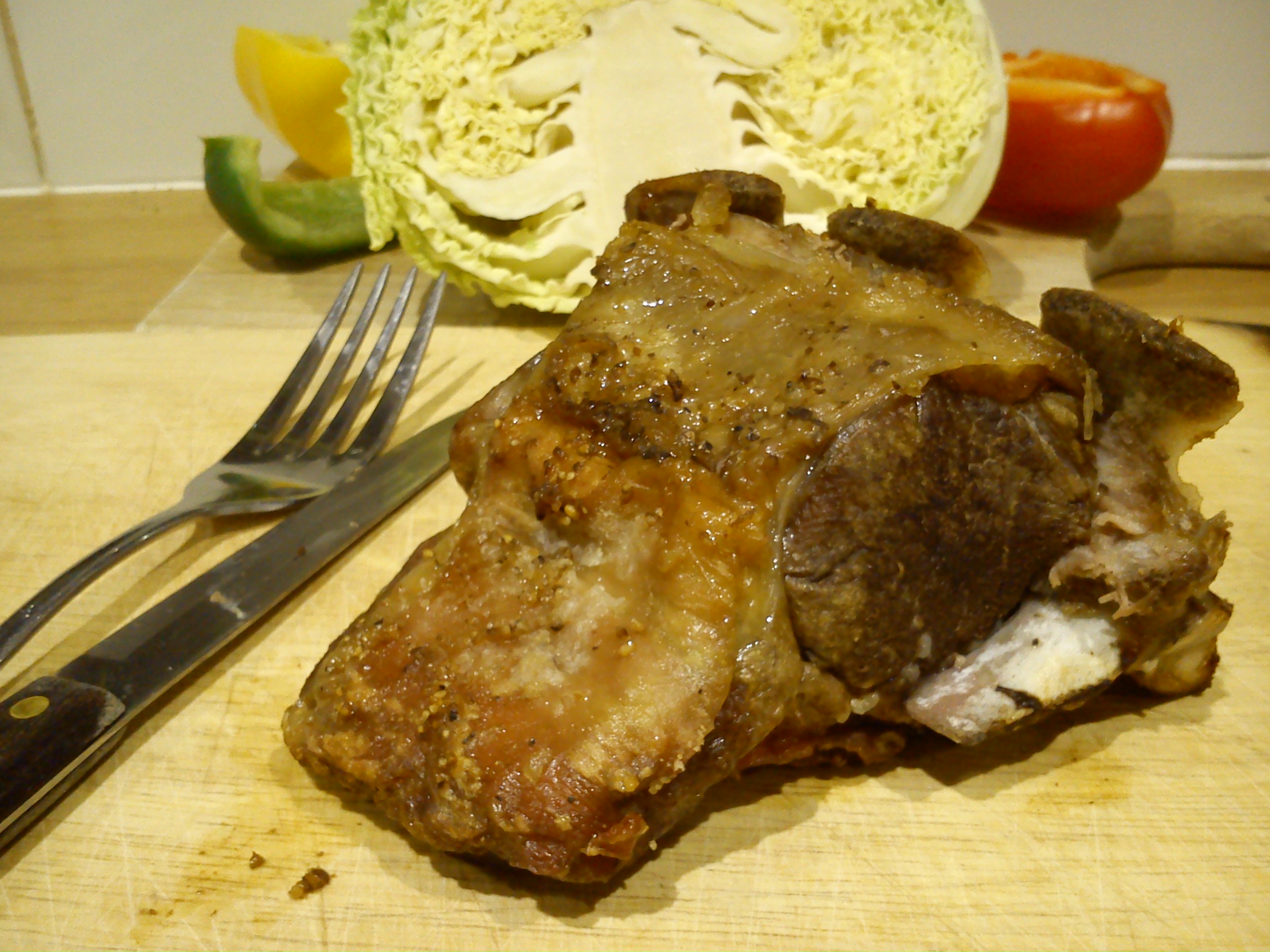 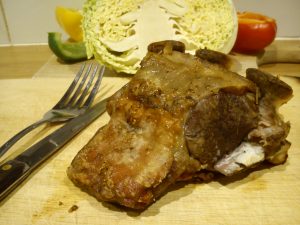 Roast Loin of Mutton. You can eat red meat after all says the latest report.

The BBC reports on what it describes as a ‘controversial study’ which says you can eat red meat and stay healthy after all.

The report disagrees with most major organisations on the planet.  For example, the World Health Organization’s International Agency for Research on Cancer said red meats were “probably carcinogenic”. Nevertheless the BBC reports ‘there was limited evidence’.

Some experts have praised the new “rigorous” assessment.

Others, defending current government guidelines, protested “the public could be put at risk” by such “dangerously misguided” research.

The fourteen researchers were led by Dalhousie University and McMaster University in Canada.  Most had PhD’s or MD’s or both.

Their findings are published in Annals of Internal Medicine. They do suggest there could be marginal health benefits if people cut out three portions of red or processed meat every week for various lengths of time.

However, the risks are not that big and the evidence is so weak they could not be sure the risks were real.

“The right choice for the majority of people, but not everyone, is to continue their meat consumption,” one of the researchers, associate professor Bradley Johnston, told BBC News.

“We’re not saying there is no risk, we’re saying there is only low-certainty evidence of a very small reduction of cancer and other adverse health consequences of reducing red meat consumption.

“Based on the research, we cannot say with any certainty that eating red or processed meat causes cancer, diabetes or heart disease,” he said.

Government Guidance not based on evidence

They take issue with government guidance. For example, the 2015–2020 Dietary Guidelines for Americans recommend limiting red meat intake, including processed meat, to approximately 1 weekly serving. Similarly, United Kingdom dietary guidelines endorse limiting the intake of both red and processed meat to 70 g/d. That is just over two ounces. Where that figure comes from is anyone’s guess. Indeed, the report criticises them in scathing academic tones:

‘These recommendations are, however, primarily based on observational studies that are at high risk for confounding and thus are limited in establishing causal inferences, nor do they report the absolute magnitude of any possible effects. Furthermore, the organizations that produce guidelines did not conduct or access rigorous systematic reviews of the evidence, were limited in addressing conflicts of interest, and did not explicitly address population values and preferences, raising questions regarding adherence to guideline standards for trustworthiness.’

Kevin McConway, emeritus professor of applied statistics at the Open University, called it an “extremely comprehensive piece of work” .

Prof David Spiegelhalter, from the University of Cambridge, said: “This rigorous, even ruthless, review does not find good evidence of important health benefits from reducing meat consumption

“In fact, it does not find any good evidence at all.”

On the negative side, Public Health England officials told BBC News they had no intention of reviewing their advice on limiting meat intake.

An NHS webpage says ‘eating a lot of red and processed meat probably increases your risk of bowel (colorectal) cancer’. Cutting down to 70g ‘could help reduce your risk’. So that’s a ‘probably’ and a ‘could’ on a webpage quoting the WHO but citing no actual evidence whatsoever.

In Australia, ‘Research commissioned by Cancer Council estimates that in 2010, one in six (or 2600) new bowel cancer cases in Australia were associated with consuming too much red meat and processed meat.’ That’s ‘estimates’ not ‘concludes based on evidence’. And how much is ‘too much’?

Meanwhile, Harvard Professor Walter Willett complained of ‘layers of flaws’ and ‘egregious abuse of evidence’. Prof Willett is a vegan.

Dr Marco Springmann, a pro-vegan campaigner from the University of Oxford, said the “dangerously misguided” recommendations “downplay the scientific evidence”, which, in any case, comes from a “small number of meat-eating individuals from high-income countries”.

Dr Springmann gives the game away. The scientific evidence, as the researchers also point out, on the effects of a diet in which we eat red meat is sparse. It is simply impossible to conduct any rigorous scientific study on the effects of a certain diet on individuals over the time needed to establish cause and effect. You need to rely on them to eat red meat or not faithfully, report correctly, and have enough of them to maintain control groups over decades. It is just not do-able.

So many of the earlier so-called findings are driven instead by people’s preconceptions or prejudices. What, for instance, drives the Soil Association, guardian of all things organic, to promote ‘meat-free Mondays’?

The comments from Prof Willett and Dr Springmann betray a quasi-religious fervour. They definitely have an agenda and are never backward at promoting it. They believe they are moving with the spirit of the age. Moreover, they are quick to enrol environmentalism. But their thinking is muddled and covered with spin.

Speaking of environmentalism, the BBC print a table suggesting which foods have the biggest carbon footprint.

It’s important to note that in the table, ‘high impact’ beef is that fed on grain in (largely) American feed-lots. The cows we kill for Grey Alders are all low-impact grass-fed sucklers. Moreover, digesting grass rather than grain is what their complex ruminant digestive systems are designed to do.

Lamb becomes ‘high impact’ when fattened on soya feed to reach a specified killing weight early for Easter (or to some extent for Christmas). Our Wernlwyd wethers (castrated males) and cull ewes are all grass-fed, low-impact animals.

Bear in mind something has to eat the grass which covers 26% of the earth’s surface. Take away the sheep and the deer will quickly move in. Remove the cattle and wildebeest will happily fill the vacuum.

I’ll just say a word on pigs, although we don’t supply pork. Pigs can have a really low impact on the environment and benefit their community if they are fed on scraps. They make a much higher impact when they are fed on soya-based farm feeds. And yet under EU rules farmers are forbidden from feeding scraps or swill to pigs. The rules came in at the insistence of the UK following the last outbreak of foot and mouth in 2001. It was an over-reaction. It is allowable to feed vegetables such as turnips to pigs. But crazily you can give your pig his own potatoes to eat but not the peelings from your potatoes.

It’s the worst-case animals which allow vegans to come up with a “planetary health diet” which recommends most protein should come from nuts and legumes (such as beans and lentils) instead of meat.

The key is a balanced diet, with more vegetables, which are packed with vitamins. Beans are great, but bring only 9% protein to the table, compared with 25% of a portion of beef or mutton.

Indeed a vegan diet depends on nuts, which grow on trees mainly overseas and in not enough numbers to feed everyone unless the rainforest is cut down for them.

Which leads me to observe the vegans should not be allowed to monopolise the environmental debate. Nor can they claim any moral high ground.  Their diet relies on shipping and/or flying in food from all over the globe, as a routine (quinoa, avocados, goji berries) and to fill the spring ‘hungry gap’ (most vegetables).

On the contrary, meat from the farm down the road keeps food miles to a minimum with huge environmental benefits.

We’ve pointed out recently that eating meat is just fine for the environment.

Moreover, vegans’ insistence on having their soap made from olive oil means transporting the oil itself from the Mediterranean.

Of course modern sensibilities demand soap be made from palm oil rather than beef fat. The latter is a waste product of the butchery trade and is as environmentally-friendly as you can get. The use of palm oil, not just in soap but in foodstuffs, has resulted in the destruction of rainforests in Indonesia and Malaysia.

As it happens, we are just about to launch good honest soap made from beef fat right here at Grey Alders!

But I digress.  The latest most comprehensive report says you can happily eat red meat as part of a balanced diet and stay healthy.

Just be sure to source your beef and mutton from Grey Alders!

Don’t forget to share this article using the buttons below:

This site uses Akismet to reduce spam. Learn how your comment data is processed.