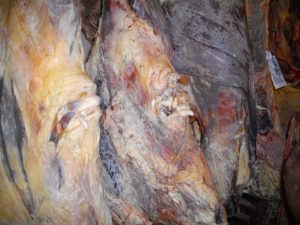 Our latest beef carcase hung in the chiller for 56 days. Inside it’s dark red and full of flavour and tenderness.

This is what a beef carcase looks like when you have aged it for 56 days – a full eight weeks! Surface moulds accumulate, none of which comes anywhere near the finished product. Instead, our butchers carefully turn it into steaks and roasting joints, with the not so tender cuts ending up as diced beef and minced beef. But when we say ‘not so tender’ those meat enzymes have been working away for all that time in the chiller, building in tenderness and depth of colour as well as superb flavour. 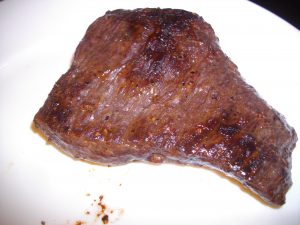 The famous Hanger Steak, cooked to perfection by Judy.

I spent some time with the guys as they were at their work. The skill of butchery is astonishing. ‘How long before you get the basics?’ I asked innocently. ‘About a year’, came the reply. And that’s just the basics.

We’ve been experimenting with quirky cuts from the fore-end. Cuts like Flat-iron Steaks (seriously). Not to mention the famous Hanger Steak, of which a cow yields only four. And Judy has just cooked two of those and they were so good the other two are earmarked so I’m sorry, not this time!

The plan is to be in Carmarthen Farmers Market Friday 22nd and Llanelli Street Market Saturday 23rd, weather permitting. (Looks good at the moment.)

We are here again thanking God for yet another very successful and sold out event. This was an opportunity to explore the world of the Celtic Saints, learn about their robust view of faith and life, and walk where they walked. This was faith-building and lots of fun. Pilgrims came from all over the country on the afternoon of Sunday 30th December 2018 some even coming back again for the second time (we must have gotten something right!!!). We tried to pray as they did and had plenty of delicious homemade good food too – says the cook (and the reviews!). 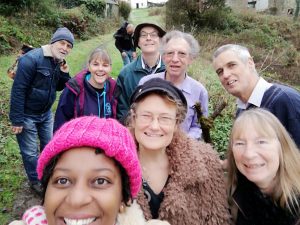 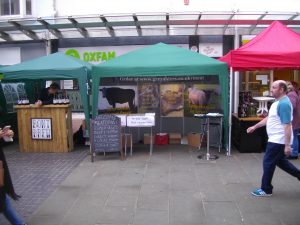 We had a great day at the very first Llanelli Food & Drink Festival on Saturday 20th October 2018.

Lots of dear folks stopped for a chat and many bought individual cuts of our super-aged beef.

We were sandwiched between country wines on one side and beer from Bridgend on the other. Not a problem. You need something good to eat with all that to drink.

In fact there were some serious and discerning meat shoppers at the Festival and we sold out of all the individual cuts of 56-day-aged beef we brought along.

If you shared your contact details with us on the day, we’ll let you know by text or email as soon as more becomes available. If not, put your details in the pop-up which will appear when you leave this page.